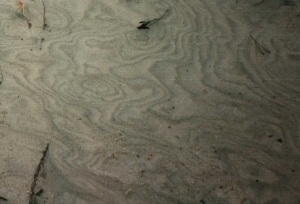 “Like the circles that you find, in the windmills of your mind”!

A very telling song when you put it with nautural phenonena. ‘Wheel within a wheel’. Just these two lines alone can give a kick start to writers who have ‘lost their muses’.

Just take one of the lyric lines, maybe turn it around, mix it up and voila, an idea may form. Has anyone tried this idea?. Not from just this one song, (which may not be your type of song), but any you can think of that tickles your fancy. There are enough in this world to choose from, are there not?

The picture above was taken on the beach of a Canadian lake. Not one of the great big ones, but something a tad smaller (though it looked quite large to me at the time I was there). This was a small ( about 6 to 8 feet across or thereabouts) depresion between a few trees, soft sand blown hither and thither by the currents of the winds. Like rivulets going this way and that way. Such wonderful patterns that had nothing to do with human minds. This could appear in a piece of writing in some way or another. You decide. What I am saying here is that there are many natural occurrences, phenomena etc. that can be used either as description or as some form of topic.

Some of us forget that Nature can provide untold scenery, happenings that can be woven into the thread of a story, be a backdrop, become a focal point. Use your imagination like a camera. Take mental pictures of things you see around you ( a phone camera is almost as good), it is just a memory jogger for your mind.

So next time you travel somewhere, go to the marrket, visit friends or relatives, look at the sea, a lake, a hill or mountain, look closer. Ask yourself, “can I use this in my story?” You may be pleasantly surprised. Or if you are at a sports location, any kind, look at the surroundings, take note of the people around. All the characters or characterisations could be there, if only you looked a little closer and noted them down for possible use. It might be worth the effort. Even a favourite film can trigger ideas fir later use. Why not try it?

The storm wind
Blows hard, it races
Across the sky, like
Some demented hare.
Wild, furious, untamed,
Its breath beats harsh
Across the land, taunting
Trees in its path.
Tearing limbs, ripping
Boughs, whipping them
Into scudding missiles.
Tarmac clouds, brooding,
Billowing, tumbling over
And over in an erratic ballet.
Leaden, they are laden
With heavy moisture,
Waiting the moment
Like an Exocet, to let loose.
Lightning crackles,
Strikes fast, pierces
The sky, its brilliant forks
Seeking home on Earth.
Power. Majesty.
Carried in the forceful
Erratic wind, this way, that.
It is master, for a time,
But not forever.

Take care out in the world, my friends.

Hythe from the Seventeenth Century

A Blog About Wherever My Mind Takes Me.

Morgen 'with an E' Bailey

Where anything can happen and does